I'm in the process of building a auto-vacuum system for a large commercial pool, based on a Polaris 280, and found that some Amazon resellers have Polaris 280 components on clearance. I purchased a complete 280 unit, plus the booster pump, for about $490 ($324 + 166). This was over $150 below my WHOLESALE cost for these units.

Here are the links:

Now, this is not for everyone -- but if you have an aging pressure-side Polaris, and want a new cleaner, or if you need a new booster pump, this is a great opportunity.

Watch the pricing however. My guess is the prices on each component will jump $100 - $200 once the seller has cleared out excess inventory.
Posted by poolforum at 2:56 PM 2 comments:

With small children, as little as 15 seconds of submersion can stop their breathing.

And, if you aren't able to apply CPR IMMEDIATELY, your child may become yet another tragic statistic. People worry about pool chemical safety, even though chemicals hardly ever cause serious injuries, even when people misuse them. And we constantly warn people about the dangers of not having ENOUGH chemical in the water (usually:not enough chlorine). Low chlorine does result in a lot of illness, but even that is almost always non-fatal. A week or two of diarrhea is pretty miserable for EVERYONE in the family, but it's very different then death.

When people die around pools, too much WATER -- not chemicals, not drains, not any of the other things that the press has ranted about -- is almost always the cause. With adults, it's swimming + alcohol or drugs that usually results in fatalities. But with children, it's lack of adult attention.

And, it just takes 15 seconds of inattention with very young children. A quick response to a friend's text is long enough for your young child to die. So is a quick trip to the kitchen to grab a soft drink. A potty break is long enough older children to die. 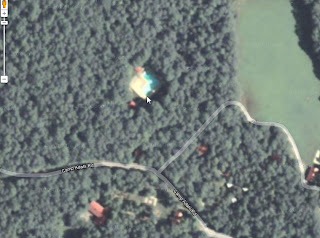 My wife and I will never, ever forget a moment, now over 20 years ago, when we were swimming at a Girl Scout camp I serviced at that time. The camp was closed, but I had a key, and I often scheduled service runs -- if we weren't delivering bleach -- so we could work, then swim. We took our then 4 1/2 year old with us. I was a certified ARC lifeguard at that point, though not yet an instructor.

You can see the pool in the photo. Google Maps doesn't have very high resolution images of that area, but the photo shows the pool pretty much as it was then. There were swim-out steps on each side of the shallow end. Susan and I were sitting with our feet in the water at those steps, just where the cursor is in the photo, talking.
Our son was immediately in front of us, playing on the shallow steps. Apparently, for just a few seconds, we took our eyes off of him, and were looking at each other.

When I turned back, he was in water over his head, paddling frantically. He was able to turn around and face us, and his eyes were out of the water . . . but his nose was not. We both remember those eyes: we remember them as seeming to be as big as dinner plates! There had been no splash, no cry, and no noise. But, if I hadn't looked back in time -- if I'd continued looking at Susan for just a minute, just 60 seconds, there was an excellent chance we would have lost him.

Since that time, we've avoided swimming around children whose parents aren't paying attention. Whether I want to, or not, I remember those eyes and 'go on duty' -- lifeguard duty.  We've left public swimming areas, because I was working, not having fun.

A pool is a WONDERFUL asset for families. Everyone in my family loves to swim, though we tend to prefer natural water to pools, and big public pools to small home pools. My boys are both excellent competitive swimmers, and are far, far more fit than most of their classmates. You can't eliminate all risk . . . and if you are going to live, and let your children live, you have to take risks and let them take risks.

But, a pool is a big responsibility, too. I'll never, ever forget my son's eyes: it just takes 15 seconds.

Tragically, the people in these articles forgot:
"It happened so fast!"
"Twin 4 year old boys dead"

Let their loss warn you: You must not forget!

Posted by poolforum at 2:20 PM No comments:

Discover the secret of why rain causes pool algae! 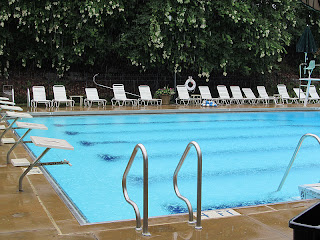 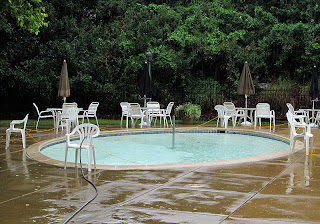 These pictures, taken during regular hours of a country club pool, clearly illustrate why pools turn green in the rain. If, it's not immediately, look again. What's missing?

Still not seeing it?

Ok, it's people! When it rains, people ignore their pool. The hose in the kiddie pool picture is there, because the pool staff ignored the water level, even though they know the pool leaks. It's brown, because they ignored the need to clean up the pool, after the swim team drug the lane ropes through the mud, and then through the pool.

The same thing happens with home pools: it rains and pool owners forget they ever had a pool.

But, the algae spores in the air, and (usually) already in the pool don't forget. They wait. And when the chlorine gets low enough, they breed. If it rains for a couple of days, those friendly neighborhood spores will have a HUGE head start by the time the thought "Oh, yeah, I need to check the pool" bubbles to the top of Joe or Julie Poolowner's thoughts.

Pool stores love it. Three days of heavy rain, followed by two days of sun . . . and their chemical sales skyrocket.

So, here's the tip: check your pool JUST as often, when it's raining, as you do when it's not!
Posted by poolforum at 5:00 PM No comments:

I've swum in some pretty cool pools before. In my favorite, I was able to watch the sun coming up over Grandfather Mountain, while swimming the north-bound leg of my laps. But this one is pretty unbelievable: Here's a page with 69 more: http://www.lovethesepics.com/2012/07/69-exquisite-infinity-pools-that-will-blow-your-mind/

Which one do you like best?
Posted by poolforum at 8:09 PM No comments:

How do you convert this 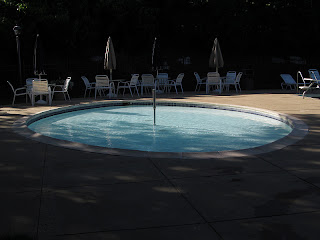 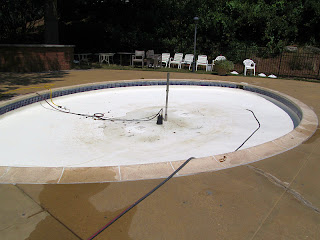 We've had to drain both the kiddie and main pool, and vacuum both, too. Not with a pool vac -- with a shop vac. Odds are, somebody will still get cut.
Posted by poolforum at 9:02 PM No comments:

At long last, the swimming pool season crash crunch is over: it's July 5th! Hope you had a great 4th!

However, many of you may lose contact on July 9th, due a long hidden computer bot. As many as 500,000 in the USA that will 'go dark' on that day. Check this US government site to see to make sure you're not one of them:
http://www.dns-ok.us/ .

This is NOT a joke.  If you want to know more, read: http://news.discovery.com/tech/dns-changer-fbi-warning-july-9-doomsday-120426.html.
Posted by poolforum at 1:01 PM No comments:

Lions, tigers and bears! Wait, no. I mean, Blogs, Twitters, & Facebooks! And, Pluses!